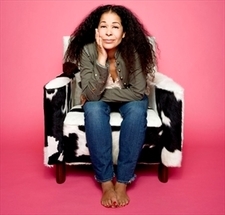 That decision led to her taking the stage in the upcoming Music for Memory Project concert at the Horseshoe Tavern.

Johnson had long been in the public eye, from her days as a child actor in musical theatre through a career fronting bands Aldo Nova and the Infidels. That career slowed – though she still made music, recording a number of solo albums – when she started a family 18 years ago.

“After 18 years at home baking cookies, I decided this year to not say ‘no’ as much,” she said. “The second I said I wouldn’t say ‘no’ as much, Chris Tait (of the band Chalk Circle) called me up and asked me if I’d like to be in (Music for Memory).”

While the concert is for a good cause, Johnson admitted to feeling some hesitation when first asked.

“It was completely out of my comfort zone – the artists all learn a John Mann song and I’ve always found it hard to learn other people’s stuff,” she said. “But I had promised myself I wasn’t going to keep saying ‘I can’t, I’m making dinner, I’m baking cookies, call me in 10 years.’”

The concert’s philanthropic nature also appealed to Johnson, who has a long history of using music to enact change. In the 1990s, she founded the Kumbaya Festival, an annual concert series that featured top Canadian acts in a bid to raise funds and awareness around HIV/AIDS.

“The whole notion back then that AIDS was a gay disease was my impetus for starting (Kumbaya),” she said. “I wanted to deliver the bad news to young people that you don’t have to be gay or an intravenous drug user to get AIDS.”

Last year, she released an album of Billie Holliday covers and hopes to use that as a springboard for more philanthropic work.

“This year’s the 100th anniversary of (Holliday’s) birth,” she said. “Every jazz station in the world is going to be playing her songs, and if the people who own the copyrights to her music are ever going to make money off of it, it will be this year. I’m hoping to cajole the owners of those copyrights to give if not all (the residuals) then at least a portion from this year to Boys and Girls Clubs.”

Those clubs are near and dear to Johnson’s heart. While her own sons are older – her oldest is headed to university and her youngest is going into Grade 9 – she knows the value of after-school programming.

“Every parent fears that 3 p.m. to 7 p.m. window when kids are just floating around with nothing to do,” she said.

For now, however, Johnson is focusing on the Music for Memory Project, for which she will play “My Oh My” from her own catalogue along with a selection from Mann’s body of work.

The cause for that concert is also near to her heart.

“My stepmother has Alzheimer’s and I’ve seen how it works – it’s really devastating,” she said.

In addition to performances by Johnson and Mann, the Music for Memory Project concert will feature Royal Wood, Andy Maize and Josh Finlayson of the Skydiggers and other Canadian talent.

It will take place on Wednesday, April 29 at the Horseshoe Tavern, with concert-goers who donate an iPod shuffle to help those suffering from Alzheimer’s disease or other forms of dementia receiving a special limited edition concert gift.

For tickets or information, visit www.musicformemoryproject.org

Back to all news