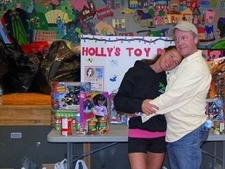 For Maria Jones, the mother of Holly Jones, the annual aerobathon and toy drive she and Holly’s father George Stonehouse host is all about helping the needy and preserving their daughter’s memory.

“It feels good to be doing this every year, but it’s bittersweet obviously,” said Stonehouse.

The fundraiser, which asked the public to donate unwrapped toys and/or a non-perishable food item, is in memory of Maria’s 10-year-old daughter Holly who was abducted after walking a friend home in May 2003 in the Perth Avenue and Bloor Street West area.

“No matter what, the loss of a child is painful forever,” Maria said.

“(Over the years) it becomes easier to deal with the pain, I would say.”

On Sunday, Dec. 7 the gymnasium at Parkdale’s Masyark-Cowan Community Centre was filled with about 100 people coming in and out, dropping off toys and non-perishable food items.

“Every year it’s getting bigger.”

Over the two hours of the aerobathon, donations nearly filled the stage as participants enjoyed a fitness workout. Maria says she first started the fundraiser during her first Christmas without Holly.

“I couldn’t figure how I was going to buy gifts, put them under the tree and know they’re not going to get opened,” she said.

“And I couldn’t think about going through Christmas without buying her gifts. So then I thought, why don’t I buy the gifts as if I’m buying them for Holly and give them to needy children.”

That’s when Maria thought it would be as if Holly is giving the kids the toys. Maria received an outpouring of sympathy and support in the years since her daughter’s disappearance and it hasn’t stopped.

This year, similar to last, all the toys and food will be donated to the Dovercourt’s Boys & Girls Club. According to Sheldon Taylor, the executive director of the club, he’s grateful Maria and George chose them as the recipient for the donations for the second year in a row.

“It’s important for us, at our club, to see community support because in essence we’re a community organization,” Taylor said.

“It’s nice when everyone comes together and supports the event.”

The donations will be distributed through the club’s Christmas Hamper program, which makes food baskets for 350 families filled with canned goods, bread, turkey and ham, said Taylor. The toys will be given out during one of its upcoming Christmas events.

Maria said when it came to choosing the recipient of the donations this year, the Dovercourt Boys & Girls club was the obvious choice

“They’ve been with us since day one,” she said.

“When I found out they help all these families and all these less fortunate kids we couldn’t think of anyone better to give back to.”

Although plenty of toys and food items were donated on Sunday, both Maria and George are still striving for bigger and better.

“I’m never really satisfied until that stage is filled with toys. Every year that’s my goal,” she said.

“Still to me it’s not enough.”

Maria said she has her sights set on having large corporations donate and be sponsors for the fundraiser, whom she said have already approached her.

“I expect it to be twice as big next year,” she said.

Back to all news